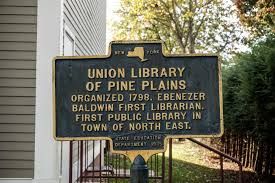 The Union Library of Pine Plains, forerunner of the present library, was incorporated on February 17, 1798. There have been 15 librarians in the library’s first 220 years. Although the first meetings were held at the public house of Ebenezer Baldwin (later the Stissing House), the 1 st librarian was actually Asahel Haskins, the proprietor of the public house on the opposite corner (later the Ketterer Hotel).

It was in 1874 that the status of the library was changed from a membership corporation to a tax supported public library and when the name was also changed to The Pine Plains Free Library. The original charter for the library was first granted in June of 1895 and another absolute charter on June 24, 1960.

The municipal status of the library was established by the town of Pine Plains on October 3, 1949 at which time the town board appointed the first library board of trustees. These trustees then filled out an application to the New York State Board of Regents to obtain the provisional charter. The charter was granted and then extended by a Regents action on June 24, 1955 and made absolute on June 24, 1960. This absolute charter was later amended on December 4, 2006 to include the language required for a 501(c) 3 or nonprofit organization.

On October 15, 1959, The Pine Plains Free Library was one of thirty libraries that became part of the Mid-Hudson Library System. Over the years, this system has grown to include 66 libraries that function in providing services to five counties within the Mid-Hudson region. The Pine Plains Free Library became fully automated in November of 1999, an action that allowed it to link with the other libraries within the system. Not too many people are aware that the Mid-Hudson Library System was first originated in the town of Pine Plains and that Memorial Hall had at one time been suggested as the center of the system’s operations.

Over the years the library has resided in many different locations, starting with an initial meeting in the Stissing House on December 14, 1797 and later opening there in November of 1798. After this, the location of the library becomes rather vague. It is possible that between the years 1829 to 1880 Harry Parker (a postmaster) kept the books in the Post Office after which time the books were moved to the Eno law office. It moved to Cole’s Drug Store in March of 1885, and later moved to Cole’s residence in 1886, finally having it land in Mrs. Netter’s home when it was built on Main Street in 1904. It was through a capital fund drive that the purchase of the former McGhee building, also on Main Street, made it possible for the library to move there later in October of 1968. It was in November of 1973 that the town took over the building.

After several years, due to concerns regarding the size and condition of the McGhee building, discussions were initiated regarding moving the library again. It was at this time, in November of 2001, that some concerned citizens decided to form a non- profit organization called the Foundation For The Pine Plains Community Center & Library Inc. The purpose of The Foundation was to

raise the funds necessary for the construction of the new building that houses the library today. With the gift of the land from the Pine Plains International Order of Odd Fellows, ground breaking began on April 4, 2008.  The library began moving into this new location on May 15, 2009 and opened to the public two weeks later on June 1 st . On Feb 12, 2013 the new location was facing eviction from the Bank of Millbrook and on May 26, 2014 the library decided to move back to their old location. The proceedings that followed were well documented in the newspapers and need not to be stated here. As of December 3, 2015, the town brought the building on 7775 South Main and we moved back on Feb 20, 2016 and officially opened on Mar 1, 2016. Officially, the building is the Pine Plains Free Library and Community Center, with the library leasing the first floor from the town.

The library operates under the absolute charter that was granted by the Board of Regents of the State of New York with operating funds being provided solely by an annual appropriation from the general funds of the Town of Pine Plains. Additional funding comes from the state, individual donations, small grants, and charges from in-house operations.

The mission of The Pine Plains Free Library is to provide resources, programs, and services that facilitate life-long learning, community engagement, and public awareness of local information. A strategic plan was adopted in 2017.

Most of the information for this article was gathered from The History of Little Nine Partners of North East Precinct, and Pine Plains, New York, Dutchess County by Isaac Huntting and from the Register Herald on microfilm. You can find these materials within the library’s walls along with the charters and the names of the past and present librarians. To this day we still have the most important book of our history the old register of the “Union Library”.

We are again OPEN for short visits. Patrons may visit the library Tuesday-Friday 2-6pm and Saturday 10am-2pm. Computer use is limited to 20 minutes. Mask use is mandatory.